A journey through the cultural history of the Grand Tour

“The Grand Tour grew increasingly fashionable as the 18th century progressed” “Like their forebears who went on the Grand Tour, visitors to the Gallerie d’Italia Piazza Scala can expect a fascinating journey” “Artists from across Europe moved in large numbers to settle in and around Florence, Venice, Naples and, especially, Rome”

A new exhibition at Milan’s Gallerie d’Italia offers a detailed look into the popularity of the Grand Tour, which drew Europe’s nobility, artists and intellectuals to Italy in the 17th and 18th centuries. Many of the artworks are on loan to the Intesa Sanpaolo museum in Milan

“A man who has not been in Italy is always conscious of an inferiority, from his not having seen what it’s expected a man should see.”

So said the eminent British writer Samuel Johnson in the 1770s. Johnson, who never left his homeland, spoke with both honesty and authority. From the end of the 17th century to the start of the 19th, Italy was a supremely popular destination for young European nobles, aristocrats, artists and intellectuals.

They would stay for months, sometimes years, typically in the company of a guide-cum-tutor known as a cicerone. The Grand Tour became as essential a part of a well-born man’s education as a university degree. It offered a chance to study the myriad splendours of classical culture, as well as those of the Renaissance, up close and in situ.

Among the highlights is a bronze statue of the seated god Mercury, from the town of Herculaneum, made in the 1st century AD. Now kept in the Archaeological Museum of Naples, from where it is rarely lent, the piece was described around the turn of the 19th century by the Italian sculptor Antonio Canova as “the most beautiful sculpture in the world”.

The exhibition features 130 artworks, some of them from Intesa Sanpaolo’s own holdings, along with some from private collections and a number from major institutions including the Museo Nacional del Prado in Madrid, the Musée du Louvre in Paris, and the Metropolitan Museum of Art in New York.

In his painting Veduta della Sala degli Animali dei Musei Vaticani (1786-92), the French artist Jacques-Henri Sablet captured a Grand Tourist left awestruck before a classical sculpture in the Vatican Museum’s Hall of Animals. The image offers an interesting insight into how visitors reacted to the treasures Italy had to offer.

The German writer, Johann Wolfgang von Goethe, offered a similar opinion when he hailed Rome as “the First City of the World” and described his arrival there in the mid-1780s as ensuring that “all the dreams of my youth have come to life”.

The first recorded use of the term “Grand Tour” was in 1670 in the guidebook The Voyage of Italy, written by the English travel writer and priest Richard Lassels. Two decades earlier, the signing of the Peace of Westphalia by various European powers had provided a geopolitical context in which international travel was made easier than ever. 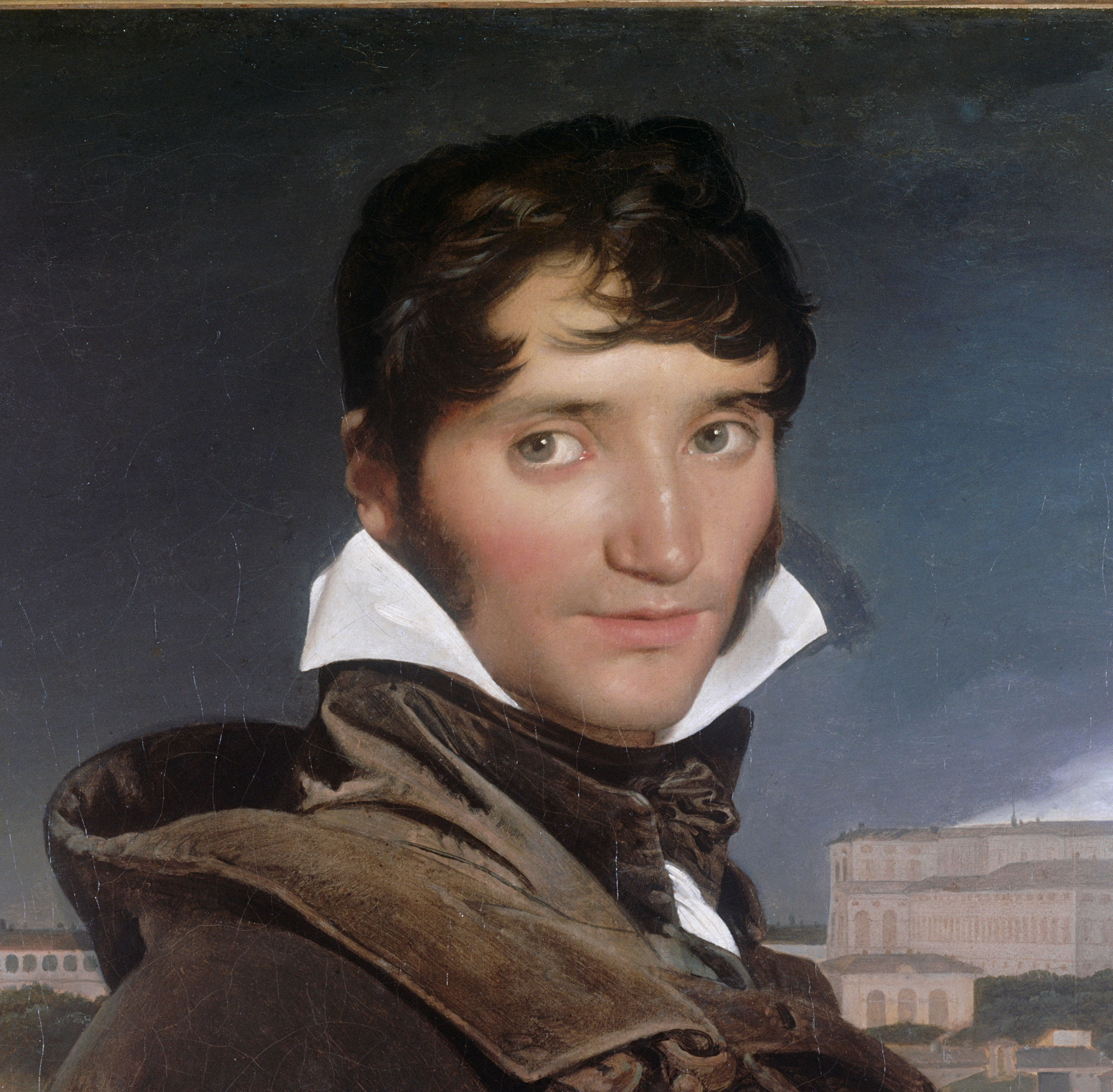 Exhibition highlights
As a souvenir from their travels, Grand Tourists liked to purchase classical sculptures as well as pictures of their favourite places. In the case of the latter, this generated high demand for painters of Italian landscapes and vedute (topographical views). It meant that artists from across Europe moved in large numbers to settle in and around Florence, Venice, Naples and, especially, Rome.

Abraham Louis Rodolphe Ducros from Switzerland was one of them – and he is represented in the exhibition by two paintings. He had several important clients, including Grand Duke Paul of Russia (son of Catherine the Great and the future Tsar Paul I) and his wife Maria Feodorovna.

Ducros captured the couple twice on their trip to Italy in 1782: once in the Roman Forum in the centre of Rome and again at Neptune’s Grotto in the ancient town of Tivoli, 20 miles away. The Grand Duke took both paintings back home with him to Pavlovsk Palace in St Petersburg, where – when not on loan to shows such as Grand Tour” – they can still be seen today. (The venue is now known as the Pavlovsk Palace Museum.)

The most famous veduta painter of them all, Canaletto, is also represented in the show: by one of his classic picturesque views of Venice, which were hugely popular with Grand Tourists. Nowadays part of the collection of the National Gallery in London, Regata sul Canal Grande (1740) depicts the historic, yearly boat race along the Grand Canal known as the Regatta. 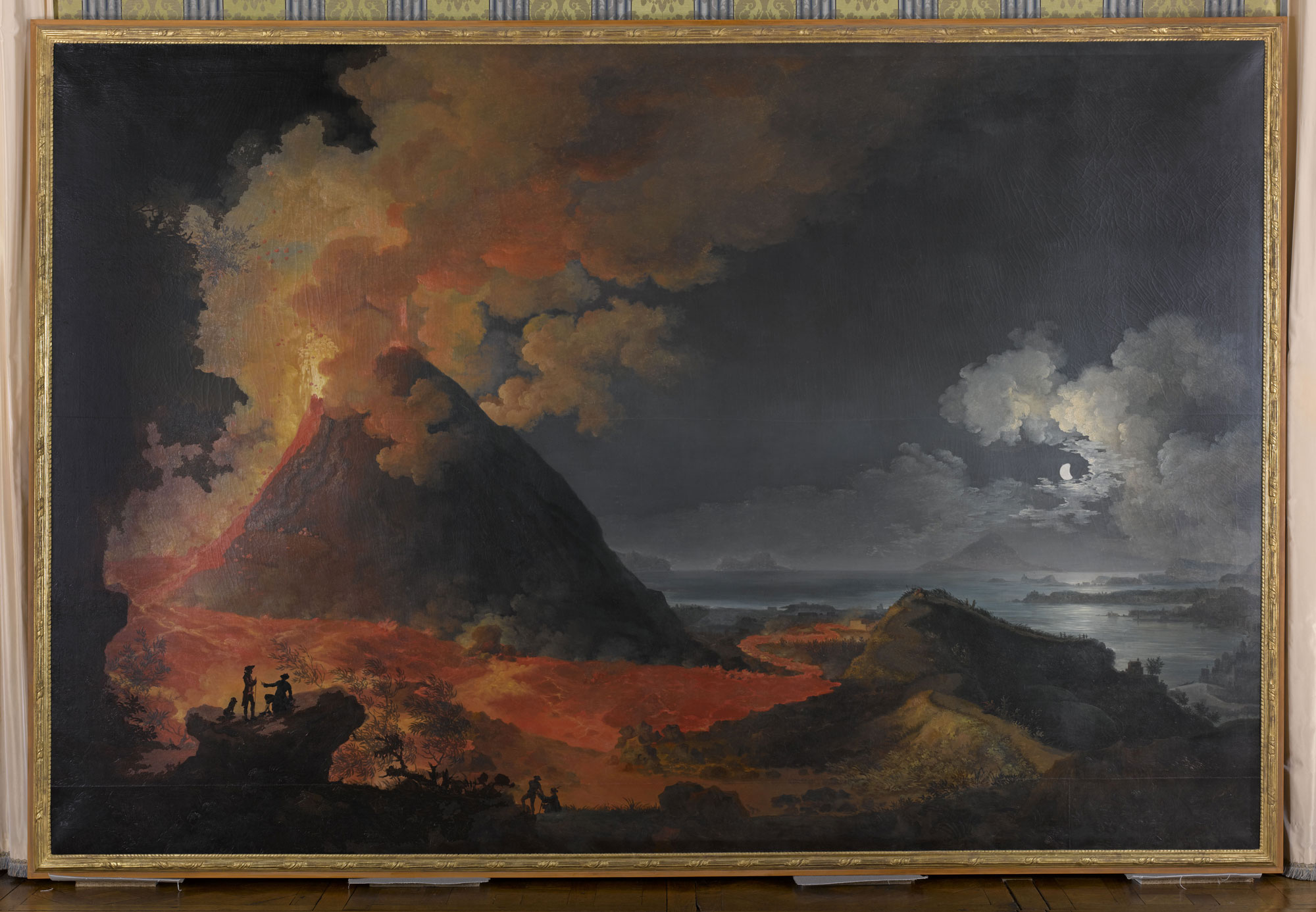 Along with vedute and landscapes, the most coveted paintings among visitors to Italy were portraits – especially those of subjects seen beside classical monuments and sculptures. The absolute master in this field was Pompeo Batoni, sitting for whom became pretty much a rite of passage for Grand Tourists in Rome. He painted the portraits of 200 British gentlemen – and five of these appear in the exhibition.

It tends to be said that the Grand Tour grew increasingly fashionable as the 18th century progressed. Two of the reasons for this are the writings of the influential German art historian Johann Joachim Winckelmann – who evangelised all things classical in books such as 1765’s The History of Ancient Art – and the archaeological rediscovery of Pompeii and Herculaneum, two towns buried by the volcanic eruption of Mount Vesuvius in 79 AD. 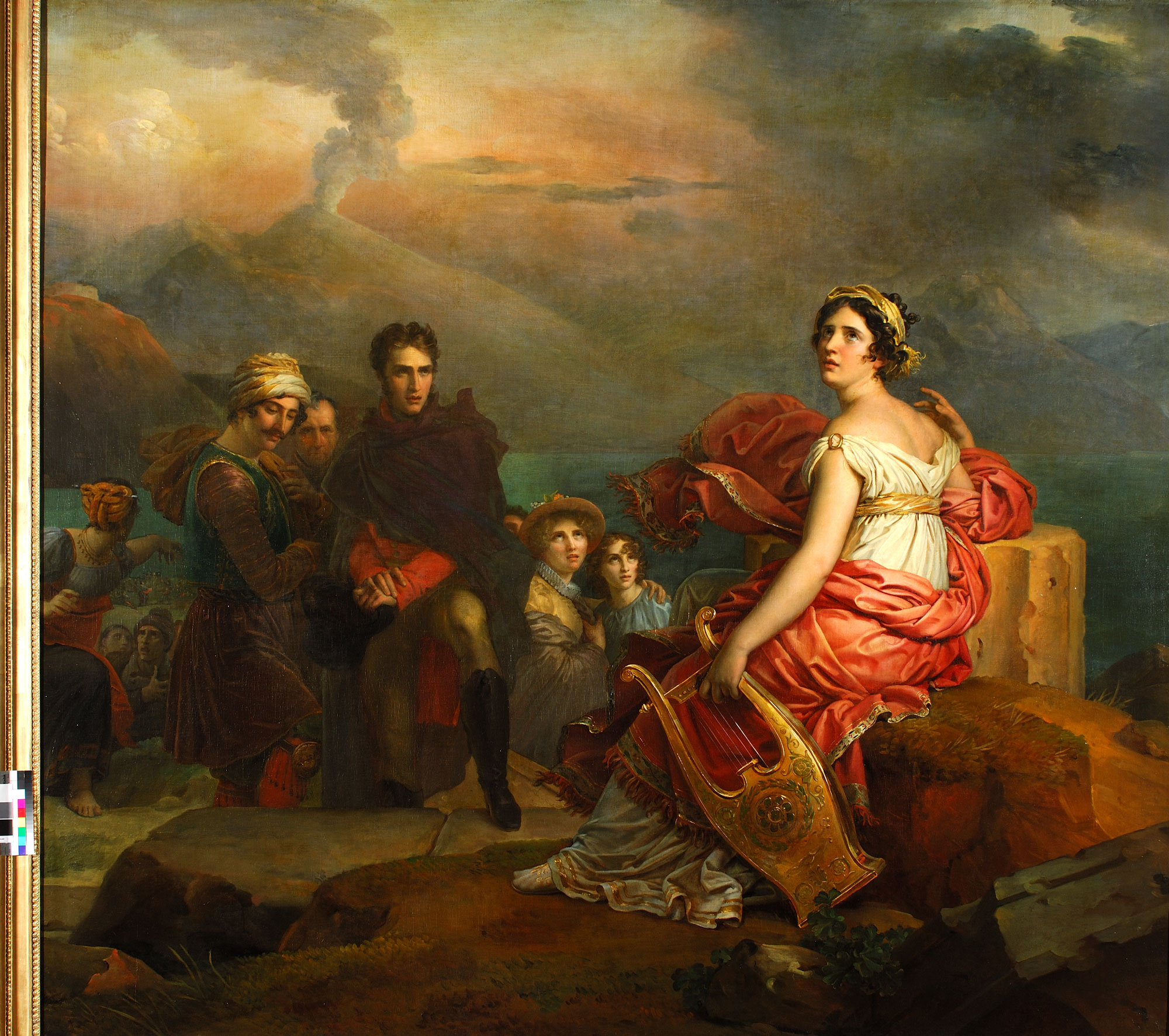 The Grand Tour exhibition is being staged as part of Progetto Cultura, highlighting Intesa Sanpaolo’s long-held policy of contributing not only to economic growth in society but to cultural richness, too.

The show harks back to a time when visitors from across the continent came together to soak up Italian culture and, in the words of the bank’s President Emeritus Giovanni Bazoli, made a “decisive contribution to the creation of a European identity”.

Like their forebears who went on the Grand Tour, visitors to the Gallerie d’Italia Piazza Scala can expect a fascinating journey.

Grand Tour, Sogno d’Italia da Venezia a Pompei is at the Gallerie d’Italia Piazza Scala in Milan until 27 March 2022 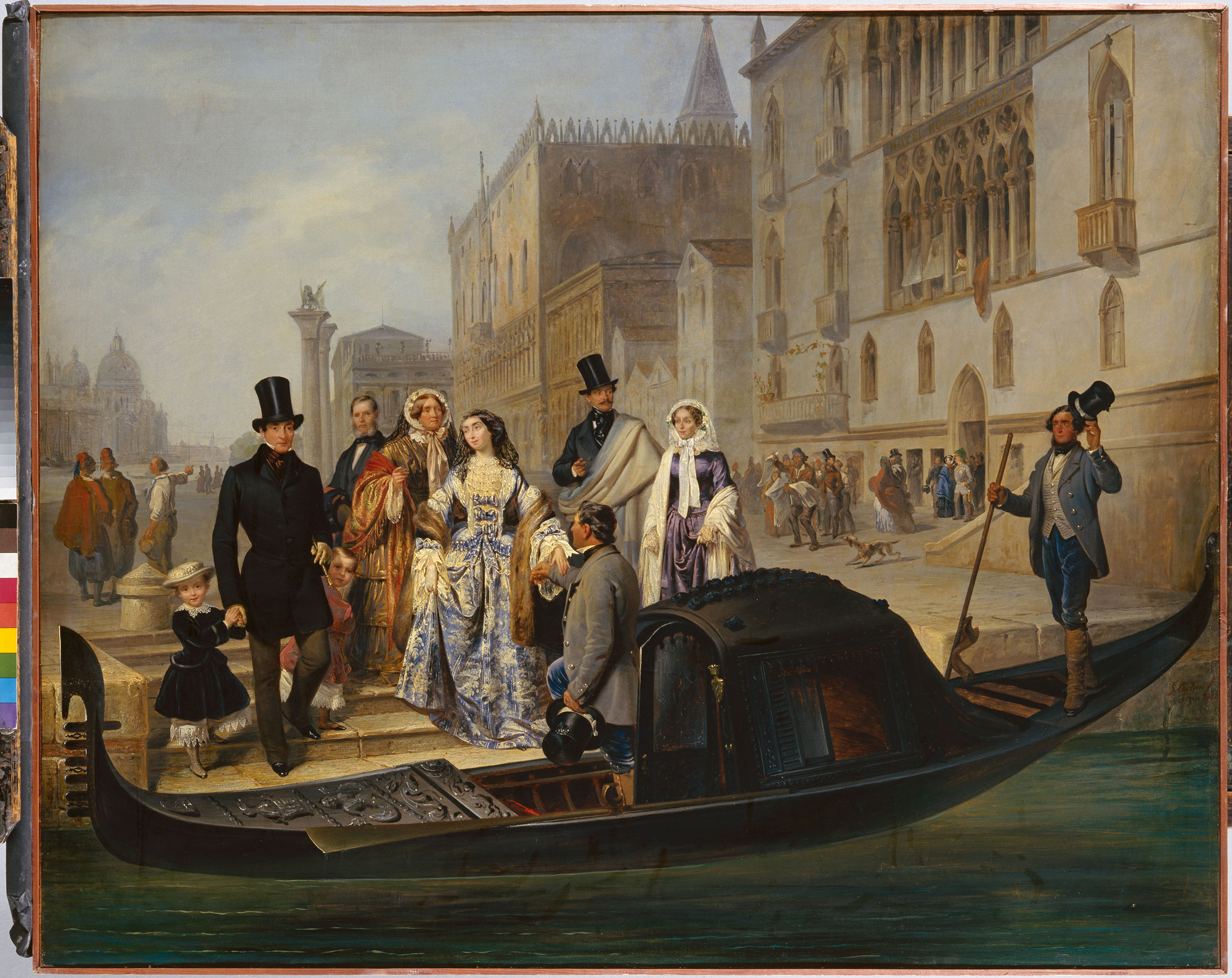